According to the latest figures, 61% of the palm oil imported by the EU is used for biodiesel and to generate electricity. The EU is currently reviewing its biofuels policy – now is the time to call for a ban.

To: The European Commission, Parliament, Council of Ministers and the governments of the 28 Member States

“Biofuels are a tragically misguided idea. Ban their production and use immediately.”

The world's rainforests are being cleared for industrial monocultures to produce the ethanol and biodiesel that will end up in our fuel tanks. Far from being a "green" fuel, the production of biofuels releases countless tons of carbon into the atmosphere.

Studies made on behalf of the European Commission warn that the production and use of palm oil biodiesel results in three times the carbon emissions of fossil diesel. Biodiesel from rapeseed and soya also has a larger carbon footprint than fossil diesel.

8.8 million hectares – an area larger than the entire island of Ireland – is needed to satisfy the EU’s demand for biofuel. 2.1 million hectares of palm oil plantations in Southeast Asia are dedicated to the production of biodiesel for the EU.

Establishing those plantations costs orangutans, forest elephants, tigers and rhinos their habitat. On Borneo, more than 100,000 orangutans lost their lives over the past 16 years. 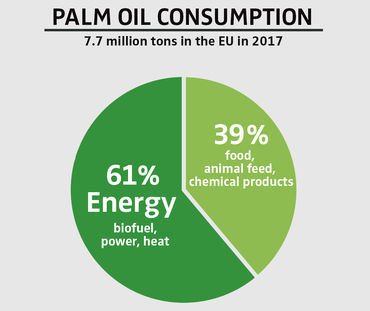 In 2017, the European Parliament voted overwhelmingly to stop imports of palm oil and the production of biofuel from tropical vegetable oils. It has called on the European Commission to outlaw the use of palm oil for biofuels by 2020 at the latest.

We now have an opportunity to stop the disastrous effects of biofuels. The European Commission, Parliament and Council of Ministers are currently debating the future of bioenergy in the EU for the years leading up to 2030. Please sign our petition calling on the EU to scrap its tragically misguided biofuels policy.

Figures on the production and consumption of conventional biodiesel (fatty acid methyl ester, FAME) and hydrotreated vegetable oil (HVO diesel), as well as ethanol in the EU’s transportation sector

Cerology, Sept. 2017: Thought for food - A review of the interaction between biofuel consumption and food markets

To: The European Commission, Parliament, Council of Ministers and the governments of the 28 Member States

Every year, the Member States of the EU consume around 22 billion liters of biofuel for transport. Considering the millions of people suffering from hunger or malnutrition, the use of foods such as vegetable oils, corn and wheat to produce fuel is highly inappropriate.

The vast space requirements of dedicated energy crop monocultures are displacing food crops and leading to the destruction of irreplaceable ecosystems.

Palm oil imports have a particularly grave impact in this regard: Industrial oil palm plantations are spreading at the expense of natural ecosystems, destroying biodiversity and robbing rainforest inhabitants of their livelihoods.

Furthermore, the climate benefits of biofuels are a fallacy: studies produced on behalf of the European Commission have concluded that the production and use of palm oil biodiesel results in three times the carbon emissions of fossil diesel. The climate footprints of soya and rapeseed oil also compare unfavorably with fossil fuel.

Environmentalists, human rights activists, scientists, development experts, international organizations such as the United Nations and OECD, as well as thousands of citizens from around the world, are calling on the EU to end its tragically misguided biofuels policy.

UN: extinction crisis endangers us all

The current extinction crisis is a major threat to the future of humanity. One million species could soon vanish unless we take drastic action – ‘business as usual’ is no longer an option.

The destruction of tropical forests remained at alarming levels in 2018. The development was particularly dramatic in previously untouched rainforests: 3.6 million hectares of old-growth forest were cleared last year alone – an area larger than Belgium.

Baby steps toward banning palm oil biofuel in the EU

Palm oil-based biofuel is anything but “green”, yet around four million tons of the tropical oil are added to diesel fuel every year. The European Commission has now adopted legislation that will phase out the admixture of palm oil by the year 2030.