Ecuador: Put the constitutional rights of nature before mining!

To: The justices of the Constitutional Court of Ecuador

“Use the rights of nature enshrined in the Ecuadorian constitution as an effective tool to defend forests and their biodiversity.”

In 2008, Ecuador became the first country to recognize nature as a legal entity and enshrined the right of people to live in a healthy environment in its constitution. Since then, those rights have not really been translated into concrete legal rulings. That is set to change in the near future, however.

The impetus for this could be Los Cedros, a biological reserve that was declared a protected forest in 1994. The scientific station that opened there in 2000 has so far produced more than 60 publications. The 6,400-hectare protected forest, with its 315 bird, five cat and three monkey species, including the endangered brown-headed spider monkey as well as the spectacled bear – not to mention more than 400 orchid species – is a rich subject for research work.

This burgeoning biodiversity is threatened by a major mining project by Cornerstone, a Canadian mining company.

The Constitutional Court of Ecuador has announced it will hear arguments in the case to protect the threatened forest against mining development. This could constitute a historic decision to apply the rights of nature in practice and to protect Los Cedros through case law.

A public hearing on the case took place on October 19, 2020, and the Constitutional Court will soon make its decision.

Please sign our petition. Let the court know that the international community is watching closely and that we all hope that it will set a worldwide historic precedent by ruling in favor of Los Cedros and the rights of nature.

Prior to the current proceedings before the Constitutional Court of Ecuador,  the municipality of Cotacachi, where the Los Cedros Protected Forest is located, had already partially won a protection suit before the Imbabura Provincial Court. The ruling forced the Ministry of Environment to withdraw the environmental permit already issued for the mining operation and to publicly apologize to the local people for failing to conduct the environmental consultation required by the constitution.

The case of the Los Cedros Protected Forest was then selected for review by the Constitutional Court of Ecuador in order to establish a national case law on the rights of nature. This would limit extractive activities such as mining – not only in Los Cedros, but in all of Ecuador’s protected forests.

Public hearing before the Constitutional Court

On October 19, 2020, a public hearing of the Constitutional Court, which lasted 10 hours and was attended by 17 scientists from Ecuador and other countries, was held. Legal experts, human rights advocates and conservationists also testified and advocated the protection of Los Cedros.

On the other side, representatives of state institutions and several mining companies gave statements.

A decision is now expected shortly, most likely before the end of the year.

A favorable ruling will facilitate the effective defense of Los Cedros and eighteen other protected forests in the country, which total nearly one million hectares and are similarly threatened by mining activities.

The judgment could set a worldwide precedent in the recognition of the rights of nature, whereby nature becomes a legal entity and not a mere object of exploitation.

The last primeval forests and natural areas in Ecuador are under increasing pressure from land speculators and illegal settlements, as well as timber, plantation and mining companies. The Ecuadorian government is currently promoting large-scale industrial mining of metals and talks about making Ecuador a “mining country”. 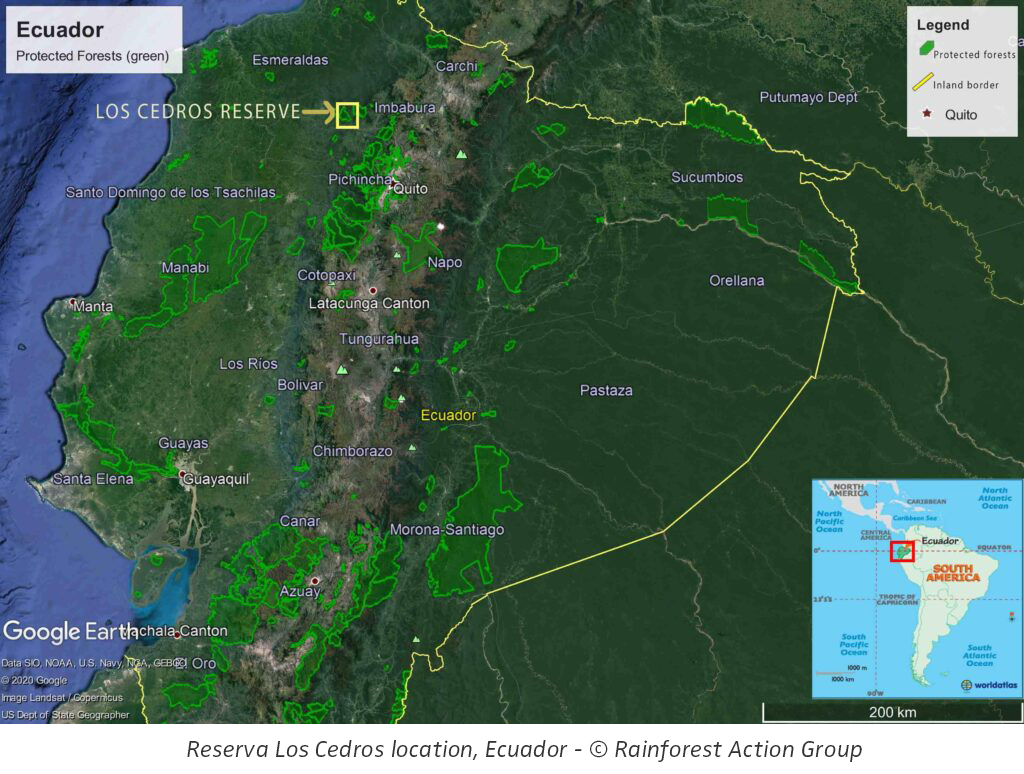 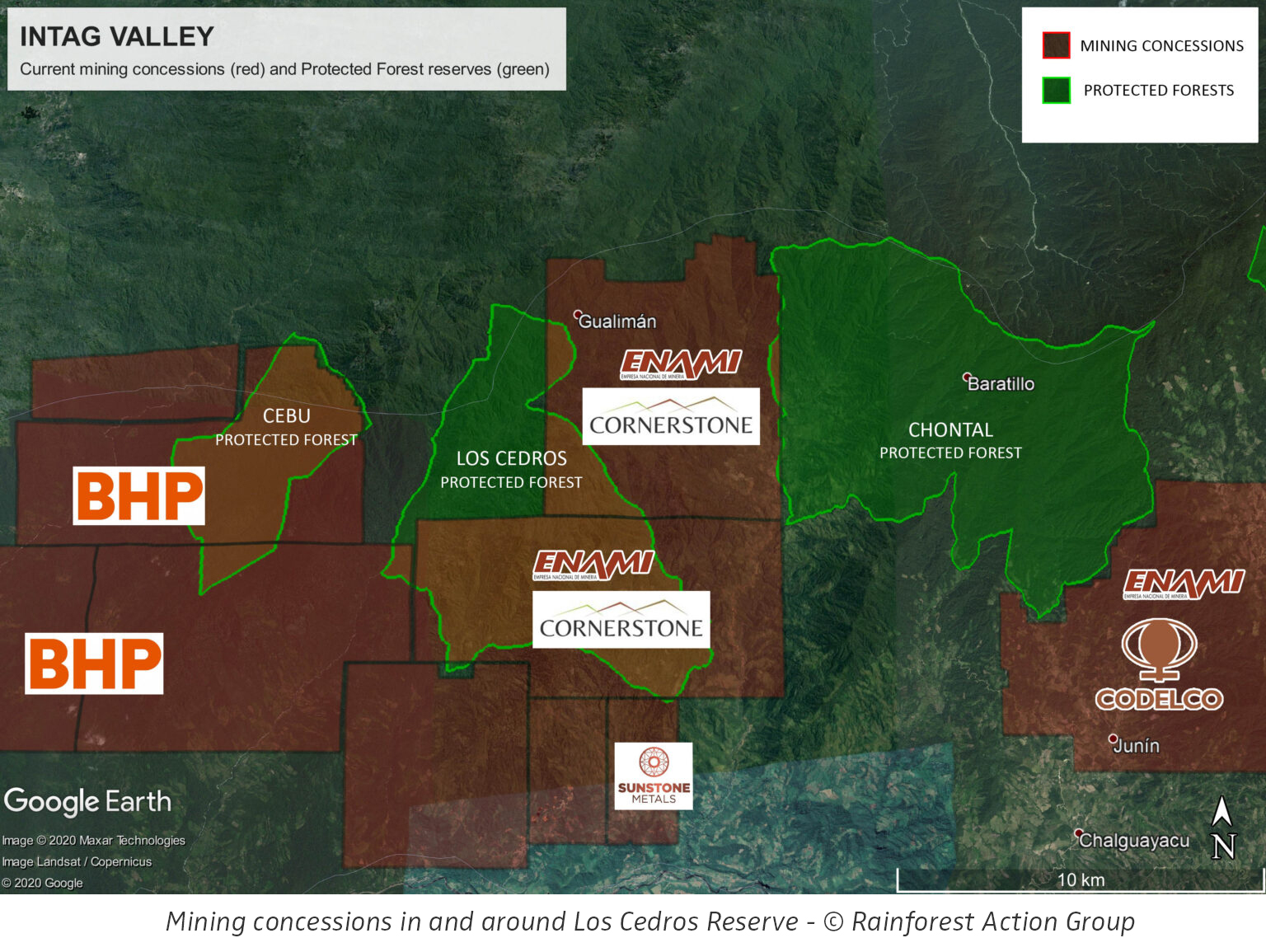 The entire planet is going through an unprecedented climate crisis caused by industrial activities such as mining. Industrialized countries are driving projects in the Global South with environmental impacts that have not been properly analyzed by the relevant governments. The countries hosting the projects are thus surrendering their sovereignty to multinational corporations, whose legal and policy influence protects their own interests, not those of the people and nature.

When discussing this topic on social media, please use the hashtags

To: The justices of the Constitutional Court of Ecuador

Ladies and Gentlemen,
You currently have the opportunity to write an important page in the history of Ecuador, South America and the entire planet Earth. The world is waiting for your decision, because the step of turning the rights of nature into an effective tool to defend Ecuador’s last forests will be of crucial importance.

Do not allow the mining industry to destroy Los Cedros Protected Forest. In these times of health and environmental crisis, the urgent need to protect forests is more evident than ever. If endangered areas and biodiversity hotspots continue to be destroyed, the effects on species, climate, and hydrological and ecological cycles will be irreversible and affect local communities as well.

The last populations of the brown-headed spider monkey live in Los Cedros Protected Forest, along with other endangered primate species such as the coastal howler monkey and the white-headed capuchin. Protection for these and hundreds of other animal and plant species that live there is urgently needed.

Ecuador’s protected forests (Bosque Protectores) are facing new and increasing threats at the national level including, but not limited to, the industrial mining of metals. The damage caused by mining in these areas would be irreversible.

The Ecuadorian government is showing its disregard for existing regulations for protected forests by authorizing prohibited activities such as mining there. This is just one example of the lack of political will to effectively protect the last remaining primeval forests and natural areas in Ecuador. The decision now in your hands is therefore of the utmost urgency and importance.

Forests like Los Cedros offer the citizens of Ecuador a healthy and ecologically balanced environment and provide a variety of valuable ecosystem services. They are also the most effective tool in the fight against climate change. It is now up to you to keep it that way. Please do justice to the Los Cedros Protected Forest and render a verdict in its favor so that the rights of nature enshrined in the constitution can finally take effect.

In 2008 Ecuador enshrined the rights of nature in its constitution – but the government has so far simply ignored this and issued new oil drilling and mining licenses for rainforest land. Now the constitutional court of the South American country has set a spectacular precedent: The protected forest Los Cedros has been declared free of mining.