Australia: The Koala's cry for help

The cry of a koala on one of the last trees. The Australian timber industry is cutting down thousands of hectares of koala habitat. Journalists and activists have presented alarming evidence. Many koalas are killed or severely injured by huge tree harvesters. Please sign our letter of protest to the Australian government.

“Stop the deforestation of Australian forests, stop the expansion of plantations and adopt legislation to effectively protect the koalas throughout Australia.”

Every day enormous tree harvesters are cutting down around a thousand eucalyptus trees in Australia. Each tree is cut down within seconds, trimmed and then piled up. No plant biodiversity can be found in the monocultures of the Australian eucalyptus plantations.

The natural habitats of the koalas are vanishing which forces many koalas to live on eucalyptus plantations. The endangered animals are slow and cannot escape the approaching harvesters. They hold on to the trees until their painful death.

Loggers have recently informed Australian television broadcasting services about the slow and horrible deaths of the innocent koalas. If the animals are badly injured, they will just be left on the plantations until they die.

“How often does it happen?” the journalist asks the logger. “Sometimes two koalas per hour are killed, sometimes it’s only one koala a day. And the injured animals are left out here to die”, the man answers.

“We have found the animals in horrible condition. Broken limbs, impact wounds, broken backs, dead mothers with babies that are still alive and trying to survive”, says animal rights activist Tracey Wilson. Animal rescue centres are treating some of the injured koalas, but it is very rare for a company to call for help for injured animals. They do not want to be associated with dying koalas.

Instead, they refer to the certification label of the ‘Forest Stewardship Council (FSC)’. In 2006 the plantations were recognised as ‘responsible forest management’. The painful death of large numbers of koalas does not seem to be as important as the profits the industry makes, says the journalist.

The logs are chipped and exported to China and Japan, where they are processed in pulp and paper mills.

Please help to protect the beautiful koalas with your signature.

Each day many koalas die on plantations and in forests that are being cur down by logging companies across Australia. Precise numbers remain an informed guess. “Large numbers of koalas are being wiped out. And it’s happening right here in Australia”, says animal rights activist Tracey Wilson.

The expansion of tree plantations, the mining industry, as well as agricultural expansion and urban development are causes for the shrinking habitat of the koalas. The ‘Forest Stewardship Council (FSC)’ has labelled the cutting down of ancient forests as sustainable, which indicates they are also responsible for this horrible situation.

For years, environmental activists and animal rights activists have lobbied for the protection of the natural habitats of koalas and also for the recognition of koalas as an endangered species. Only 50.000 to 100.000 koalas remain in Australia and they form three unique sub-species.

Last year the federal government officially recognized the koalas in the states of Queensland and New South Wales as endangered. Unfortunately, the koalas that live in the Southeast of Australia (Victoria and South Australia) are not covered by this protection. The only endemic subtype located in Strzelecki-Mountains in South Gippsland, the Strzelecki-koala is therefore not sufficiently protected. 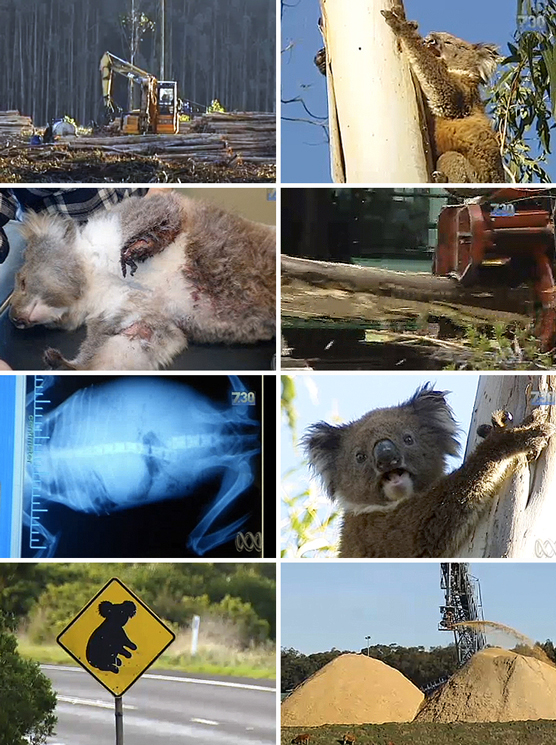 (All images are provided by the Australian Broadcasting Corporation)

I am shocked to find out how endangered koalas are being severely injured or even killed on eucalyptus plantations.

Since the koalas are slow and not capable of escaping quickly enough, they often suffer a slow and painful death caused by the automatic tree harvesters.

The koalas are forced to live on the eucalyptus plantations as much of their natural habitat has already been cut down by the timber industry. Of course, the monoculture plantations do not even come close to replicating koala's natural habitat.

I therefore urge your Government:

1. To stop the destruction of Australia's native forests and their conversion to plantations.
2. Regulate logging companies, so that koalas will no longer be injured or killed on plantations.
3. Classify the koalas as a threatened species in all Australian states and territories and develop measures for their effective protection.

The world steps up to protect koalas

We asked for your help in protecting koalas in a call to action on our website. The response was loud and clear: more than 83,000 people from all over the world signed our petition to save the Australian marsupials.